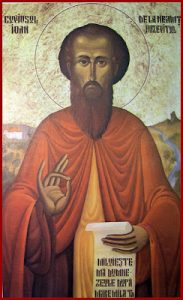 Saint John Jacob was born in Romania on 23 July 1913, in Crainiceni village, Horodistea commune, former Dorohoi county, to a family of religious peasants, Maxim and Aikaterina, having been the only child of his parents. He was baptised Elijah and turned out to be a child chosen and blessed by God.

Six months after he was born, his mother, who was in poor health, fell asleep in the Lord and left the child to his grandmother Maria to take care of him. After two years, his father died too, in war, in the autumn of 1916, so that the child was left in the care of close relatives. He attended the first years of school in his native village and then secondary school at Lipcani-Hotin and high school at Cozmeni-Cernăuţi, having been the best pupil of the school. 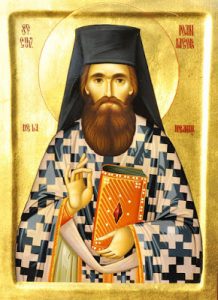 In the summer of 1932, his relatives wanted him to attend the courses of the Faculty of Theology in Chernivtsi (now in Ukraine), to become a priest. But he felt God called him to a higher life and told them: “No, I want to become a monastic!” One year later, young Elijah was working in the field and praying God to show him the way to follow. Suddenly, he heard a voice telling him: “The monastery!” He had no more peace in his soul ever since. Having taken the blessing of his father confessor, blessed John took his holy books, the cross and the icon of the Mother of God from his native house, and guided by the Holy Spirit, on a Sunday, he joined the monastic community of Neamţ Monastery. The abbot of the monastery, bishop Nicodemus, received him with much love and after he told him to go and pray to the wonderworking icon of the Mother of God in the main church, he sent him to work at the nursery and at the library of the monastery. He was very silent, obedient and devoted. 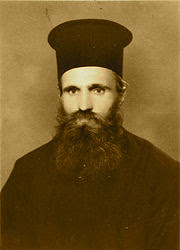 From 1934 to 1935, he did his military service in Dorohoi, as a male nurse, showing much compassion to the sick and was loved by all. In the autumn of 1935, he came back to the community of Neamţ Monastery and continued the same service as librarian and male nurse at the monastery’s infirmary. All those around benefited from his humbleness, kindness and love, and thought he was chosen by God.

On 8 April 1936, on Great Wednesday of Holy Week, the blessed rassaphore John Jacob was tonsured into monasticism by hierarch Valerie Moglan, the new abbot of the Great Lavra, by the monastic name of John, together with two other rassaphores. As he wished to live an ascetic life and longing for Christ and the Holy Places where the Lord was born, suffered and resurrected, the blessed monk John Jacob left for the Holy Land together with two other monks from the lavra, Claudie and Damaschin. After they prayed at all the Holy Places and venerated the Cross of Golgotha and the Holy Sepulchre, the three monks retired to spend the winter with the community of Saint Savvas Monastery, in the desert of Jordan. Then, his companions went back to Neamţ Monastery, while the blessed monk John Jacob kept on living at Saint Savvas Monastery near Bethlehem, for ten years, suffering hard temptations, diseases and trials coming from people and from demons. 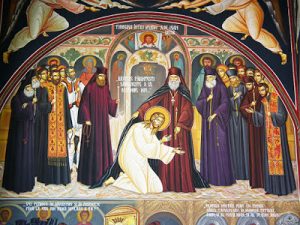 His first task within the community of Saint Savvas Monastery was that of a verger. Pious John had great devotion for the church and for the holy services. He made prosphora, cleaned the place and rang the bells for religious services. He also kept an atmosphere of love, lowliness and mercy for everybody. He also had to be the male nurse of the monastery and took good care of the monks with great love, as well as of many Arabs and Bedouins, of the sick, or of the war wounded brought to the infirmary of the monastery. This is why they all loved him and wanted to contact him. His father confessor was Hieroschema-monk Savvas, a great adviser of the souls, Macedonian in origin, who could speak Romanian, and who took Confession for all the Romanian monks who lived in the Holy Land. Thus, during the day he was in the service of the community and of the sick and at night time he was alone in his cell where he said many prayers, made prostrations, shed tears and read from the Holy Gospel and from the writings of the Holy Fathers. He had a good command of the Greek language, so that he translated some outstanding patristic pages used to spiritually feed him and those who came to visit him. He also had the gift to write spiritual instructions and poems, which he sent to his brethren from the Holy Land or gave to the Romanian pilgrims who came to pray at the Holy Sepulchre. 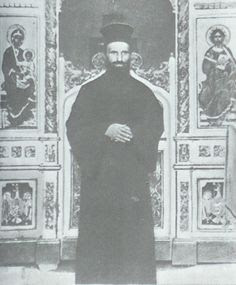 From 1939-1940, the blessed hermit John Jacob lived together with another Romanian disciple in a cave in the desert of Qumran, close to the Dead Sea. There, he met monk Ioannikios Pârâială, who was his faithful disciple until his death. Having been a hermit, he ate only rusks and few fruits. He used to pray at night, alone, suffering many temptations.

From 1940-1941, because of the war, pious John stayed together with several monks from the Holy Land in a camp at the Mountain of Olives. After he was released, he went back to Saint Savvas Monastery and continued to practice the same spiritual obedience and efforts.

On 13 May 1947, with the agreement of the Patriarchate of Jerusalem and the blessing of the Patriarch of Romania, he was ordained deacon, in the Church of the Holy Sepulchre, following the recommendation of Archimandrite Victorin Ursache, the superior of the Romanian Pilgrim Hostel in Jerusalem. The same year, pious John Jacob was ordained priest in the Church of the Holy Sepulchre by hierarch Irinarh from the Patriarchate of Jerusalem and appointed by the Romanian Patriarchate abbot of the Romanian Skete of Saint John the Baptist in the Jordan Valley, close to the place where Jesus Christ, our Lord, was baptized. For five years, as long as this task lasted, pious John Jacob celebrated all the religious services in the Romanian language almost every day, translated many pages from the Holy Fathers that comprised teachings for monks and pilgrims; he wrote a rich book of spiritual poems, renewed the cells and the church skete and most of all the spiritual life of the skete, met the Romanian pilgrims whom he took confessions for, administered Holy Communion and gave saving advice for their soul. But, at night, secretly, he prayed alone in his cell, or went to pray in the Jordan Valley, trying to follow, as much as he could, the example of Venerable Mary the Egyptian. His only constant disciple was Monk Ioannikios, as well as some Romanian old nuns, Melania, Natalia, Galina, Cassiana and Magdalena, who were his spiritual daughters under his guidance. 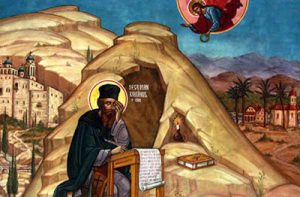 In November 1952, pious John the Hermit retired from the position of abbot and joined, together with his disciple Ioannikios, the community of Saint George the Chosebite Monastery in the Choseba desert, in the valley of Cherit (or Horat) River. After one year he and his disciple retired to a cave nearby, called Saint Anna’s Cell, where, according to tradition, she prayed to God to give her a child. A Cypriot monk named Paul was living in another cave, nearby. There Saint John the Hermit and his disciple lived for 7 years in permanent prayers, night vigils, long fasting, tears shed, meditation and spiritual aspirations, suffering all kinds of temptations, pains, shortages, fighting against the devils, in total seclusion, glorifying Christ and praising the Triune God. His cave was hard to reach, with a high ladder, and he did not receive anybody there, communicating with those who came to him especially through prayer, through spiritual writings and through his disciple. At the great feasts and at fasting times, the Saint celebrated the Divine Liturgy in the chapel of Saint Anna’s cave, together with his disciple, and both were taking the Body and Blood of Christ, thanking God for everything. During the day, when he had time, he wrote religious poems and translated patristic writings from Greek. He ate only once a day, rusks, olives, figs, and drank a little water, and at night he slept on a board with a stone as a pillow. 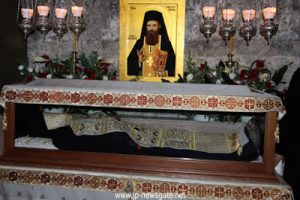 In the summer of 1960, he was sick but suffered with much patience. Feeling his death was close, on Wednesday, 4 August, he received Holy Communion and on Thursday morning, at 5:00, he reposed in the Lord, at only 47 years old. After three days, he was buried in the same cave by the abbot of Saint George Monastery, Archimandrite Amphilochios, and after 20 years, on 8 August 1980, his body was found complete, without decay, spreading a nice fragrance, showing that he was glorified by God who included him in the host of the saints, due to his spiritual diligence and the holiness of his life. All those around were filled with great spiritual joy. 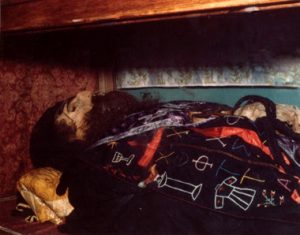 On 15 August 1980, the same abbot prepared a shrine carved in cypress wood where he laid him with great respect and took him in procession to the church dedicated to Saint Stephen in the precincts where his relics were laid, in the same place of worship where the relics of Saint George the Chosebite are to be found. In 1968 and 1970, Saint John’s book Spiritual Nourishment was published in two volumes, with the blessing of Patriarch Benedict of Jerusalem.

Pilgrims have come to pray to the pious’ relics ever since, asking for his help, which all those who pray to him receive. Taking into account the holiness of the life of pious John Jacob and seeing his holy relics, the Holy Synod of the Romanian Orthodox Church included him among the saints on 20 June 1992, by the name of Saint John Jacob of Neamţ, celebrated on 5 August, the date of his passing away in eternity. The Holy Synod of the Patriarchate of Jerusalem likewise recognized him as Saint John the New the Chozebite on 31 January 2016. 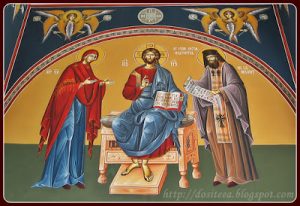 Apolytikion in Plagal of the Fourth Tone

In you, through zeal the one created in the image of God was saved, O Father, for forsaking the world and leaving your homeland, you took up Christ’s cross, and you dwelled in the valley of Jordan to labor. Wherefore, O Venerable Father John, your spirit rejoices now with the angels. Intercede with Christ our God to save our souls.